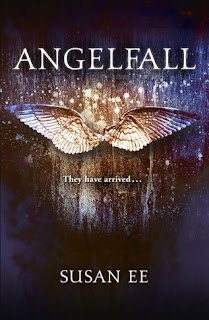 Angelfall by Susan Ee
Release Date: May 23rd 2013 (originally self published on May 23rd 2011)
Publisher: Hodder  and Stoughton
Add it: Goodreads
Overall: ♥♥♥♥♥

Oh my god. I remember seeing this ALL OVER the book community in 2011 back when it was self published... WHY DIDN'T 2011 ME READ THIS SOONER *shakes past self by the shoulders*

Six weeks after the angels destroy the modern world as we know it, Penryn is on her way to find a sanctuary on the streets with her mother and 7 year old sister, when she bears witness to an angel by the name of Raffe having his wings brutally ripped off of him. Despite humans and angels being enemies, Penryn goes to his aid, but in her effort to help, her wheel-chair bound sister ends up being taken away in front of her eyes. Penryn takes Raffe's wings and demands him to help her find her sister.

I loved every aspect of Angelfall I don't even know where to begin. It made me laugh, shook me to my core, horrified me and tugged at my heart strings.
Penryn as a character is a total badass and one of the most well fleshed out characters I've ever come across. Her determination to find her little sister is beautiful and never wavers and despite having a schizophrenic mother, Penryn is incredibly patient and understanding and the moments we have with the two of them are actually quite tender in a more twisted kind of way. She's witty, clever, compassionate, loyal, knows how to fight and is just an all round kick ass heroine.
Raffe is the latest literary love of my life. He's dreamy and sexy, has a great body, has a nice face.... *stares glassy-eyed into the distance*
AHEM. Anyhoo, Raffe is not only totally gorgeous but witty, sarcastic and caring too (and he's agnostic, which is just hilarious in itself). The last thing he wants to do is fall in love with Penryn, he tries so hard not to and it's simultaneously heartbreaking and beautiful.

The dialogue in this book was WONDERFUL. I'm just going to include a few snippets so you know what I mean...

'We walk for about an hour before Raffe whispers, "Does moping actually help humans feel better?"
We’ve been whispering since we saw the victims on the road.
"I'm not moping," I whisper back.
"Of course you’re not. A girl like you, spending time with a warrior demigod like me. What’s to mope about? Leaving a wheelchair behind couldn’t possibly show up on the radar compared to that."I nearly stumble over a fallen branch. "You have got to be kidding me.""I never kid about my warrior demigod status."

"These women, after all, aren't put off by men with feathers growing out of their backs, and who knows where else."

There are probably many more but I forgot to make note a lot of the time because I was too busy loving everything.

The love in Angelfall is again, probably one of the best I've ever read. Instead of driving the plot, it takes a backburner and slowly simmers for the duration of the book. The relationship between Penryn and Raffe is beautiful, it's slow and grows at just the right pace. There are a few particular scenes which had me melting, one at the beginning of their journey, and one at the very end which just broke my heart.

Now, I should warn, there are some gruesome scenes scattered throughout, particularly at the end. I would expect this in a zombie novel, but this end part surprised me. I was utterly horrified at the end and almost put the book down during one part, but I loved it. Yes, it was gruesome and horrible, but I was so enthralled I couldn't stop reading. Also, despite the gruesomeness of it, the darkness and creepiness mixed with the whimsical and beautiful romance was perfect.

Action-packed, beautifully written, fun to read, and full of twists, Angelfall is a must-read (if gruesome stuff doesn't make you queasy). This review does not do the book justice at all and if there's anything you take from this, let it be this: READ THIS SERIES.
Posted by Taneika at 09:49