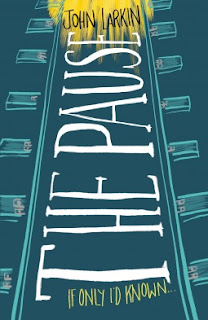 Declan seems to have it all: a family that loves him, friends he’s known for years, a beautiful girlfriend he would go to the ends of the earth for. But there’s something in Declan’s past that just won’t go away, that pokes and scratches at his thoughts when he’s at his most vulnerable. Declan feels as if nothing will take away that pain that he has buried deep inside for so long. So he makes the only decision he thinks he has left: the decision to end it all. Or does he? As the train approaches and Declan teeters at the edge of the platform, two versions of his life are revealed. In one, Declan watches as his body is destroyed and the lives of those who loved him unravel. In the other, Declan pauses before he jumps. And this makes all the difference.One moment. One pause. One whole new life.

This book gripped me from the very beginning. It was beautiful and not only full of sadness, but joy and laughter too. Declan suffers depression and anxiety, and The Pause explores how mental illness doesn't discriminate. No matter how perfect your life is or what has happened to you, anyone can fall victim.

For a good majority of the novel, we explore what happens if Declan pauses, and doesn't make the jump in front of the oncoming train. It's absolutely heart wrenching and there are so many parts in regards to depression that resonated with me. While some of the writing may seem a tad frantic or weirdly jumbled, it made perfect sense as it came straight from Declan's confused thoughts about his depression after coming to terms that he has it. The Pause doesn't try and gloss over the importance of medication as well, in fact it's encouraged and portrayed in a positive light, which is something you don't really see in YA and is something that really needs to change!

I really loved Declan's character, his struggle was so raw, yet he had his many good days to accompany his bad ones. Which is exactly how depression can be. You may not feel like shit all the time, and because of this, some people may not be taken seriously. The dialogue made me laugh several times throughout and John Larkin has a talent for blending something as serious and horrible as suicide with laughter and light heartedness.

The relationships with Declan and his family was really well done. His family is dysfunctional in all sorts of ways, and I'm pretty sure it was heavily implied his sister had ADD or something similar, but the banter between Declan and his father and tender relationship between him and his mother brought so much love and happiness into this novel, it made it a joy to read despite the subject matter.

This novel gave me so many mixed emotions. More than twice, I managed to tuck away the fact that this was a novel about suicide but would then remember at the end of a particularly happy chapter that Declan was more or less dead, and would end up crying for ten minutes because I didn't want it to be true. At one point towards the end, I ended up putting the book down and cried on my boyfriend's shoulder while I tried to explain to him what was happening. I was SO attached to these characters and I got incredibly attached to Declan's story. His girlfriend/love, Lisa was written gorgeously and their relationship was tender and beautiful. My heart ached for her and she, like Declan, made me laugh and made me cry.

Oh, and for all you Aussies out there, John Larkin is an Australian author and Declan's story is set in Sydney, so there are lots of bits and pieces that will make you smile. My personal favourites were the jabs at Tony Abbott and bigoted bogans in general (particularly in reference to the bigot's opinions on "boat people", seeing a character have such a strong opinion on this issue was fantastic). Oh, and also Declan's career list! Hilarious.

My only qualm with The Pause was how it came off as a little bit preachy in some parts (for example his obvious political point of view - which I totally agree with, but can see how it could be problematic) and how much their Dad was picked on in the family (the poor guy couldn't catch a break), but these were pretty minor and really didn't annoy me for the most part!

I feel like I've really struggled to put my feelings about this book into words. I loved pretty much everything about it, and yet this review has probably done nothing to convince you to read it but I hope you go out and buy this immediately because it was such an experience all the way through. Regardless of whether or not you've had experience with mental illness, I highly recommend this book. The Pause is a heart wrenching novel which will make you cry, but also heartwarming enough to make you laugh in all the right moments.
Posted by Taneika at 00:23