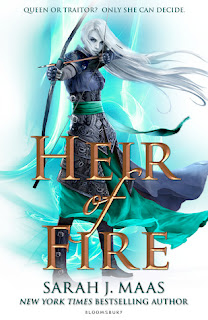 I just want to start off by saying that it takes me roughly 3 days to read a book if I'm busy or 1-2 days if I have no other commitments. It took me a full month to read this. Although I don't think this book is entirely to blame, I almost fell into a reading slump and had to put this down for a week or so while I read other things.

After Crown of Midnight, my expectations for this instalment were pretty fucking high (that book was AMAZING), but everything was boring, angsty, predictable and just not very exciting, making this the weakest of the series so far. Heir of Fire is like one gigantic anime filler; there are long, shitty training arcs for the hero, and you get to meet characters you kinda care about, but not enough to invest your heart and soul into. I'm also seeing a pattern with these books so far: Celaena trains. Has flirty banter with cute boy. Some monster is killing people. Celaena beats the monsters. End.

I was pretty hyped up to meet Rowan, but I didn't really care for him and I am still firmly a Chaolaena shipper. Don't get me wrong, I like Rowan and Celaena (after Rowan stopped being such a prick), but I love them platonically and I don't think there is enough friendship in this series as it is (with the exception of Chaol and Dorian because BOY I LOVE THOSE TWO. YOU BIG CUTIE PIES), so having these two have a friendship would be pretty cool, not to mention badass. Rowan just didn't do it for me. I dunno, I get that he's muscly and hot and all, but... is that supposed to make me fall in love with him?

I also hated Manon's chapters and was oh so tempted to skip every time she came up. I actually liked Sorscha somewhat, she was a bit vanilla and boring, but I was interested to see where her character was going. Aedion was again, very boring and I didn't care for him at all.
To summarise, I didn't give two shits about any of the new characters. I just wanted to know more about what Chaol and Dorian were up to, which we sadly don't get much of until the end of the book.

If you can't tell already, I adore Chaol with all my heart, and I really felt sorry for him in this instalment. He puts everyone before himself and it never turns out well for him. The way he was treated by some of the characters pissed me off a little bit, but the ending made it all okay (in a heartbreaking kind of way).

Maas' writing has improved tenfold since Throne of Glass which I appreciate, however apart from being shockingly slow for the most part, Heir of Fire was incredibly inconsistent in pacing. A few times I found myself getting really immersed, only for the chapter to end or switch over to a new point of view (often Manon's, which as I've established, I don't care about) and a new wave of boredom would wash upon me. The worldbuilding in this series is still absolutely phenonmenal and getting to read about an entirely new continent was great (I want a map of Wendlyn SO FREAKING BAD).

I dunno, I just really struggled with Heir of Fire and wasn't really enjoying it until about 400 pages in (the book is 550 pages altogether). I'm about halfway through Queen of Shadows at the moment and I'm still looking forward to where this series goes.
Posted by Taneika at 07:49