A Monster Calls by Patrick Ness 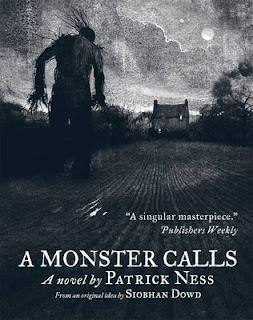 A Monster Calls is one of those books that sticks with you for a long time after reading and you're probably going to need tissues.
I could have easily finished this in one sitting were it not for life being extremely busy at the moment!

Conor is a 13 year old boy who's mother has terminal cancer. He has had recurring nightmares since she started her treatments and in addition to this, his grandma is fast-paced and doesn't understand him, and his father lives in another country with his new family. On top of that, the teachers at school see him as invisible and he's constantly made fun of by other kids.

I read this for something to try and get me out of an oncoming reading slump, and it worked. By the end I was sitting on the couch just staring at, and rereading the pages because although I knew what was coming, it didn't make it any easier to read. This book explores grief and loss and the effects it can have on anybody, let alone a 13 year old boy.

The monster that Conor meets in his mind and dreams (not nightmares, that's a different monster), tells stories of others he has helped and I suppose the moral of each is that things are quite often not so black and white as one might think. Conor struggles with these ideas at first due to his grief and denial, but grows to realise that the monster is there to help him through things. I loved the monster. He was scary in the way a monster should be, but also ancient, wise and he genuinely cared about Conor.

Conor's relationship with his mother is heartwrenching and you feel the love they have for one another. That's the thing about this book, there is so much love and I think that's what makes it so sad. Rather than simply telling us, Patrick Ness does a wonderful job of showing you the relationships between characters and how they care for Conor in particular, in different ways.

The only thing I didn't quite understand was why they all seemed to treat Conor like he was a baby, when he was 13 and was more than capable of doing a bunch of things himself. Although I kind of understand considering how people tend to treat others with extra care in delicate circumstances.

There's not a lot I can say about this book except that you should definitely read it, although you should prepare tissues if you do! Oh, and PLEASE get the proper paperback/hardback of this rather than an e-book version, because the illustrations that accompany the story are magnificent in themselves.

A truly brilliant novel, and one that will stay with me for a long time.
Posted by Taneika at 00:01