Last night, I was doing my usual little stalk on Twitter when a retweet caught my eye. I clicked on the original tweet's link and what I read made me cry.

Shattering Stigmas is an event running from 10th-24th August, hosted by the lovely Shannon @ It Starts at Midnight, Inge @ Bookshelf Reflections and Kayla @ The Thousand Lives. They aim to talk about all things mental health and mental health in YA fiction and they'll also be hosting competitions, games, author guest posts, author interviews and books to read which focus on mental health. Guys, I am SO super excited for this! I implore you to join in and check out their posts throughout the next couple of weeks, please! I know I'll be participating and I'll be doing my own mini readathon of mental health themed YA books (listed below). 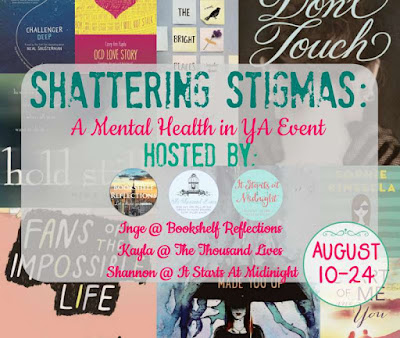 Apologies in advance for the long and detailed post, I am just lucky enough to be able to pinpoint exactly where things went wrong for me. There is a detailed paragraph on domestic violence, so feel free to skim that part if you think it will affect you badly.

Many of you may or may not be aware of my struggle with depression over the years. In fact, depression was a major cause of my almost 2 year long hiatus on this blog until recently. I don't know how long I've had depression for, as far as I know it's been on-off since about 2009, but when I really think about it, I know at one stage I was quite young.

High school was great for me and for the most part I was absolutely fine, I didn't feel depressed, have anxiety, or any other mental health issue and I had lots of friends who were there to support me in tougher times.

My final year of high school is where things started to go awry. I met a boy slightly older than me who seemed lovely, kind and caring. We hung out heaps, I made more new friends, and things were pretty great for a while. At the end of Grade 12, I failed my uni-entrance exams and thought my world was going to end (for those going through the same thing, fear not!), but managed to find a bridging course to get in instead. I saved up for the initial upfront payment in 6 months by working two jobs and 12 hour days almost everyday and inbetween working and spending time with my new boyfriend, I barely saw my family.

I moved 600km away from my home for uni, my boyfriend ended up moving shortly after, and we moved in together. The two years after that were some of the hardest I've ever been through. He was emotionally, physically and psychologically abusive, and without realising at the time, he essentially ostracised me from seeing my family or friends. Going out to visit my family when they were in my city would result in feelings of guilt and possibly a screaming match. The same thing happened if I wanted to see friends. In order to keep him happy and prevent him getting angry, I stopped seeing friends and family. Nothing I did was enough, he would regularly throw furniture at the walls, threaten me, scream at me, and call me names all the while I thought everything was my fault and I was to blame, I was never good enough. By then, my depression had well and truly manifested and when I finally realised something was wrong, I felt I had noone to talk to. I hated myself and who I'd become, and thought there was no way my family or friends would want to help me. Why would they want to help me? I'd barely spoken to them for 2 years and was this horrible person who couldn't do anything right. (I actually started book blogging around this time and it was a major help). In December 2011, I went and visited my hometown for a few months to work and started going out with people I went to high school with, I was shocked that people thought I was someone worth hanging out with. I went back to the city in January 2012 and broke up with my boyfriend. It was not easy, in fact it was one of the hardest things I've ever done, but after a couple of days, it was finally over. I moved back with my family until uni started again and the times I spent with my new friends were some of the best I've ever had.

Over the next couple of years, my depression was on and off. I had an awesome network of friends, my relationship with my family was greater than ever and my housemates at the time were incredibly understanding as well. In 2013, people I loved died and I failed some units at uni. My coping mechanisms back then were far from stellar and I would go out drinking over the holidays and kind of, I dunno, ignored everything until I went back to uni (which, by the way, you should definitely not do. In hindsight, drinking alcohol was one of the worst things I could've done for my depression), had to face reality and it all caught up with me.

At the end of 2013, beginning of 2014, I would go to bed at night not caring whether I woke up the next day and just generally didn't feel much of anything. I don't really know how, but after one of the darkest periods of my life, I managed to crawl out of that darkness and started feeling happier again. It sounds weird, but it's a bit of a blur. Over the years and to this day, I have learned to monitor my thinking patterns and have learned how to separate destructive, depressive thoughts, from normal ones. I've never been on medication due to not being able to afford it at the time (there is NOTHING to be ashamed about if you do take medication to help though, I can not stress this enough and recommend it more than my method) but I still "think about my thinking" and have started mindfulness meditation (by the recommendation of my old housemate who is very mental health aware as well).

I've been well, happy and improving since May 2014. It's not easy and my mental health is still something I work on in some way, everyday. I have bad days and some weeks/months where I am terrified I'm going to fall into a depressive episode again, and almost have. I do little things that make me feel better and so far I've managed to prevent it since last year *high fives self*

You should definitely visit Bookish Reflections whose post, 'What to do if you're feeling blue' is much more eloquent than anything I might try and suggest in regards to making yourself feel a little bit better (although I would totally recommend mindfulness meditation too, there is an app called 'Smiling Mind' which is what I use when I have "bad days" or feel like I may be relapsing again).

SO!! Onto the books! In honour of this event, I'm going to read/review as many books with mental health themes as I can. I have a few in mind that I already own and I probably won't read them all but here's to trying :) 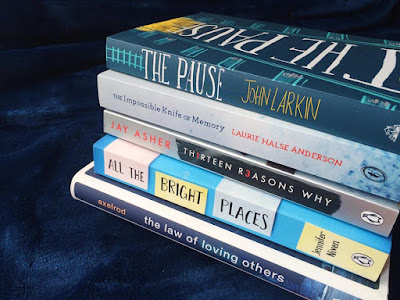 Let me know in the comments below if there are any I should go out and buy straight away and feel free to join in if you like with your own selection of books :) Even if you take the time to check out the blogs of the ladies I first mentioned in this post, that would be wonderful

If you know me personally, or even just online, I ask that you please not judge me for going into so much detail, or treat me any differently. Some of my family and close friends know the extent of my depression and struggle in the past and I'm fortunate that they love me unconditionally but I don't really openly discuss it with many others. That time period is something I was ashamed of for a very long time, and can now talk about openly about it, but I am still met with wary glances and awkward conversation whenever the words "I suffer depression" are uttered. If you suffer from depression, anxiety or any other mental illness that's not talked about as often; you are not weak, you are not a burden, and you should feel proud of yourself for doing the best you can even if it's just getting out of bed in the morning or making yourself breakfast.
Posted by Taneika at 20:30